Posted on October 8, 2012 by Christopher Scott 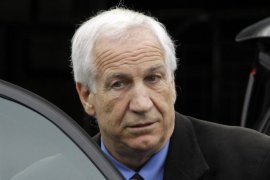 Former Penn State University Assistant Football Coach, Jerry Sandusky, is expected to be sentenced Tuesday to life in prison for molesting 10 boys over the course of 15 years in a scandal that shocked the Penn State community and the nation. While reporters scramble to find a fresh spin and put the story to bed, I figured I would add a Broken Man perspective to the proceedings.

Growing up in Philadelphia, I had my own “Sandusky Experience” when I was between the ages of nine and twelve. My prospective molester, let’s call him Jerry Jr., was a pillar in the community, a founder of a non-profit organization for children lauded throughout the area. Sound familiar? He was also secretly inappropriate with young boys, the extent of which has never been proven in court but has surely resonated with his victims.

Listening to testimony from Sandusky’s victims, I was struck at the similarities between their stories and mine. Pre-pubescent kids from broken homes, the easiest targets for predators to identify. Trapped by their need to feel loved and lack of understanding regarding a healthy relationship between a man and a boy, these boys never stood a chance against the manipulative Sandusky.

My own experience with Jerry, Jr. wasn’t nearly as damaging as what these victims went through, and I suspect I was just fortunate to have escaped mostly unscathed. There was some inappropriate touching, an unfortunate spanking, and some nights spent in the same bed with this man, things that never should’ve happened. But, it never progressed further than that, at least not that I can recall.

Flash forward twenty years from my childhood to the summer of 2003. Jerry Jr. was brought up on several charges including endangering the welfare of a child and corruption of a minor in a case that involved the inappropriate kissing and spanking of eight young boys. It was a case that sparked heated debate in the close-knit community with some people portraying Jerry Jr. as a saint who’d helped so many children while others viewed him as a monster who’d used his position to gain easy access to his victims.

Honestly, the truth lies somewhere in between.

He did help many children, myself included. He taught me work ethic, responsibility, and self accountability, lessons I probably would’ve have learned growing up in the broken environment I did. Later, I worked under his direct supervision both as a volunteer at the non-profit and an employee at the school district where he served as an Administrator. I even donated five hundred dollars to his defense fund, an action I later regretted when more inappropriate stories came to light.

Unfortunately, he also damaged many boys, their stories told at his trial, stories with which I was very familiar. The spankings with their pants pulled down, the inappropriate kissing and touching. Following the trial from Florida, I could also hear whispers, okay, make that screams, of more prurient actions Jerry Jr. had committed in the past. Crimes that went beyond the statute of limitations, crimes that defied benign interpretation, crimes that involved a friend of mine.

My friend, let’s call him Ben, was several years older than me and a significant early influence in my life. He was good to me and to all of the younger kids in the program, and we later worked together both at the non-profit and the school district. He was also homosexual, which I bring up only because of its relevance to the story.

In his mid thirties, Ben, with the help of a psychologist, recalled some less than happy memories of his time spent with Jerry, Jr. Memories of severe molestation and abuse. While many people, including myself at times, scoff at the thought of psychologists and repressed memories, I immediately believed Ben. He’d painted the exact picture I’d seen outlined in my childhood, filling it in with the painful color and details I’d somehow managed to avoid. Ben’s story changed the way I viewed my experience as a child, and in the end, altered my perception of Jerry, Jr. from one of a decent man who could border on the inappropriate to that of a serial child molester.

Fortunately, I had escaped the most severe molestation and abuse, but what if I’d been a young boy like Ben, just entering puberty, curious about his homosexuality. I’m pretty sure things might have turned out differently, just as they might have turned out differently if my prospective molester had been female or if my home environment had been more severely broken and I’d been even more vulnerable than I was. I’d simply been fortunate, resistant enough to escape his grasp.

So, what does it all mean?

First, Jerry Sandusky and others like him need to go to jail for a long time. His victims may never recover from that horrible experience, they may be broken forever. They deserve some kind of closure, and they deserve every penny they get from Penn State for the way the university covered up the incidents and allowed the molestation to continue for years.

Second, if you’re a parent, and especially if you’re a single mother, be aware. Be aware of the man that wants to spend too much time with your child. Be aware of how your child is acting and the way they’re expressing themselves. And for God’s sake, never have your child stay overnight with any adult unless it’s a well chaperoned trip with other children and adults in attendance. Even then, be aware.

As for Jerry Jr., he was eventually found innocent of all charges. His reputation irreparably damaged, the non-profit he founded shut its doors. The last I heard, he’d retired.

For the sake of our children, let’s hope he stays that way.